Big American Trip is Where I Stay 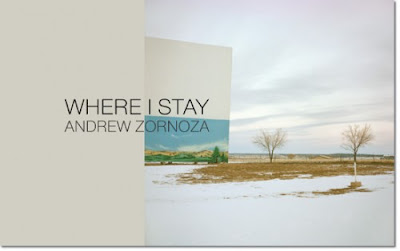 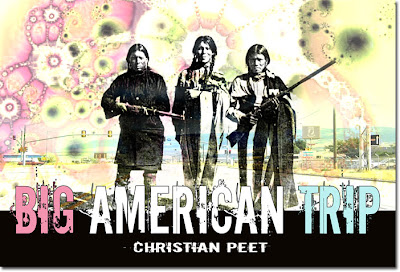 A couple of years back, Blueberry Nights, a film by Wong Kar-wai was released and it sucked. Kar-wai is known for his dreamy, gauzy, sensual films, which obsess over love, lost, place, identity and time-- all delivered in fragmented narratives. Blueberry Nights was his first Hollywood film so what better to make than a “road movie?” The movie not only lacked vision and contained some awful acting, it really showcased how the obsession with the road has become another cliché of Americana. If I think of the road as a literary trope I think Steinbeck, Kerouac, and McCarthy. So my question was whether Zornoza and Peet’s books could make the road feel fresh again. These are two drastically different texts yet both are united in the necessity of search and that ability to be in a place, or of a place, to pass through a place, but not possess or change the place—i.e. the anti-capitalist imperative, that is if Huck Finn sets off down the river to find a freer and wilder America does it exist? According to Zornoza and Peet the answer is yes and no.

Where I Stay is a prose-photo book, which sets up a rhythm by wisely having photos on every right-hand side of the page. This strategy allows for Zornoza to have a nuanced and complicated reading of his book because although the photos relate (sometimes quite loosely) to the text the photos tell their own story. So you have the opportunity to get one story from the text, another from the photos, and a third reading by combining text and photos. This allows a certain emotional resonance and mood to permeate throughout the book while challenging your intellect and intuition. Where filmmaker Wong Kar-wai failed with Blueberry Nights, Zornoza succeeds. Part of the success of Zornoza’s book is that he allows it to roam—despite it’s title this is a restless book traveling the American West, Mid-west, and Mexico. The prose gives us just enough information to remain engaged in both character and place, but Zornoza doesn’t try to define, instead allowing the reader to make associative leaps from Sept. 17, Albuquerque, New Mexico which begins,

“My older son don’t write me, but he’s a good boy, she says. We park in a diner parking lot and tilt back the seats to sleep. When I wake in the morning,she’s sewing shut the end of a pillow. A pocket with a tooth embroidered on it has been stitched in one corner.”

The next page has a photo collage of a pillow, photos of people and a newspaper. Below the photo the caption reads, “I worked at a toy factory, I worked at a restaurant washing dishes. People gave me money. I was ashamed, but I took the money, I never did not take the money.” The page after this it’s Sept. 20, Boulder, Colorado and the narrative begins,

“A man on a motorcycle with a Yorkshire terrier in the sidecar, a woman in a Volvo, and finally a water fountain, shade, a field of green grass.”

One of the reasons why Where I Stay is so successful is because of Zornoza’s ability to navigate and weave together fully fleshed sentences along with airy lines of staccato. Zornoza’s prose has range, which is what makes this book at times so beautiful and at other times so devastating.

He hands me a burger wrapped in butcher paper. He hands me a road atlas, a disposable camera, a tube of pepper spray. He picks the atlas off my lap and leafs through it. Boy this no place to be anymore. I was out there, far gone, when I was your age, then met her. We ain’t going to last, but maybe we will. He puts the car in gear. He says, We both probably been thinking that so long that it doesn’t matter. It doesn’t matter? No.

This is from Oct 25, McCaren, Texas which is followed by a photo of a bridge, grass, shrubs, and a tree-line with this caption below it,

I faded, subsumed by broken pieces of Americans and places—people, places and feelings all stitched together, larger than themselves than me and you, all stretched around us, our life together, around the country.

This is how it began, in the middle. With no beginning. A bridge and a river.

“Broken pieces of Americans and places” is part of Peet’s agenda. The irony that his book is called, Big American Trip, and has a UK publisher as opposed to an American one is lost on no one. Next is the cover, three foregrounded Native-Americans holding rifles while behind them sprawls an American street with a factory and traffic lights, finally the entire cover is covered in tie-dye. The book contains poems in the form of post-card entries. This allows Peet the ability to roam while providing only snap-shots landscape and the people. Peet’s book is overtly political and at times exceptional for its black humor. For instance on the back of a postcard entitled, Superior, Montana he writes,

Superior is good name for town lake, but coffee
Here is only the brown water.

I am finding very difficult to maintain the 75 MPH.

& great terror is the use of the law:
An eager representative of the Cherokee Jeep
Patrolled my routine encampment. His duty
The hat and the nod-- and the raised eyebrow.

At first, it’s easy to be either thrown-off or seduced by Peet’s sense of syntax or the way the poem flits around from coffee to law, but a closer examination finds Peet slyly commenting or questioning the need to name a town “Superior,” especially a town that has difficulties producing a decent cup of coffee and then the law appears as a “great terror.” Notice now how Cherokee isn’t a Native American tribe but instead a vehicle used to patrol and maintain order. The subjugating the subject is both humorous and horrifying, which is Peet’s aim—to force the reader to re-examine names and how these names are co-opted and used as a means of power. The brilliance of Big American Trip is similar to Zornoza’s book, in that both allow for and meaningfully complicate the readings of experimental or fragmented text by subtle shifts of nuance. Here’s another poem, which is addressed to WABC Radio, 77 WABC, 2 Penn Plaza, NY, NY 10121,

Found roadside a white girl is Rasta. Her mantra:
“It’s all good.” She imparts a knowledge of the
foreigner to leave me a wonder of self-scrutiny.

Come on, baby,
You can do more than
Dance.

More appropriates the desert. Even if dull words.

Is it “all good?” Peet, like Huck Finn, openly challenges authority and those that attempt to construct our world and thoughts for us. If America is a littered landscape of hyperbole, waste, and conformity, then the “wildness,” that feeling of “free-ness” seems to be gone, yet if we look at Peet’s poetry then we find through art and words there are still some of us who are wild and wide-mouth armed with pens and disapproval. Christian Peet ravages through the American landscape injecting poems with Americana, pranks, puns, and power. Both Peet and Zornoza’s books are examples of not submitting to a status quo in literature, instead they use the traits once synonymous with Wong Kar-wai: originality, vision, risks, and experimentation to give you back this country as it is: flawed, fractured, hypocritical, greedy, beautiful, breathtaking, mesmerizing, and the constant dialect of a lie and a truth.

* some formatting differs from that of the books.
Posted by steven karl at 5:13 PM

Things That I Do